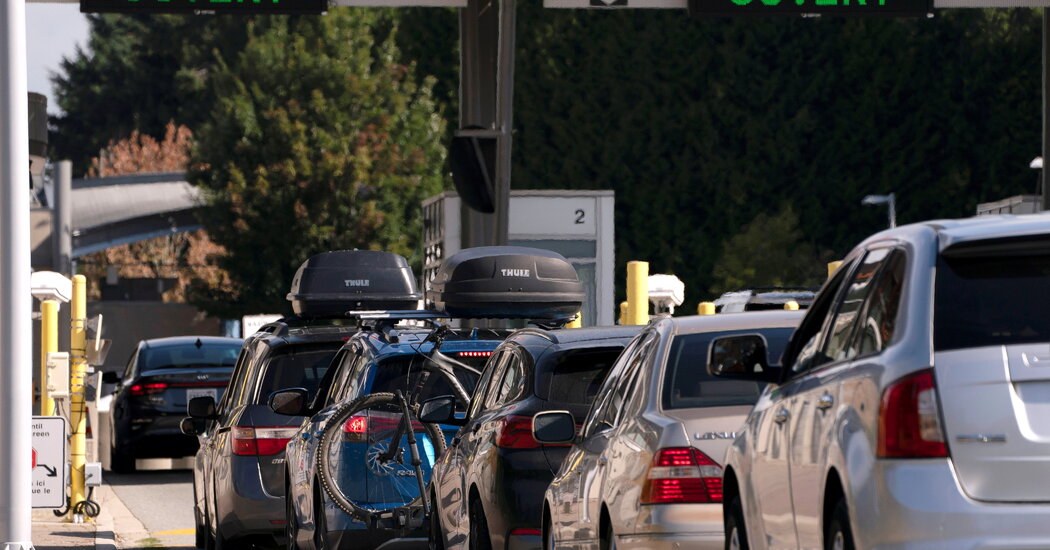 WASHINGTON — The Biden administration will lift travel restrictions at the borders with Canada and Mexico starting in November for fully vaccinated travelers, reopening the doors of the United States to tourists and separated family members who have been sealed out of the country during the pandemic.

Foreign travelers who provide proof of vaccination and are looking to visit families or friends or shop in the United States will be allowed to enter, senior administration officials said on Tuesday, weeks after the administration said it would soon lift a similar sweeping restriction on foreigners traveling to the country from overseas.

The lifting of the bans will effectively mark the reopening of the United States to travelers and tourism, signaling a new phase in the recovery from the pandemic after the country closed its borders for nearly 19 months.

But the new requirements also indicate that the United States will welcome only visitors who are vaccinated. Unvaccinated travelers will continue to be banned from crossing the borders with Mexico or Canada, officials said. Those who were never banned from traveling across the land borders, including commercial drivers and students, will also need to show proof of vaccination when crossing starting in January, giving them some time to adjust to the new rules, officials said.

The travel restrictions, imposed in March 2020, only applied to “nonessential travelers” — relatives looking to visit family members, or shoppers, whom border communities relied on for profits. Politicians representing such communities have pleaded with the Biden administration to lift the restrictions to provide a reprieve for suffering businesses.

“This reopening will be welcome news to countless businesses, medical providers, families and loved ones that depend on travel across the northern border,” Ms. Gillibrand said.

Officials did not give an exact date for the lifting of the travel restrictions. The announcement comes more than two months after Canada reopened its borders; Mexico did not close its northern border during the pandemic.

People entering the U.S. at the borders with Mexico or Canada will be questioned by Customs and Border Protection officers about their vaccination status before being allowed to cross. The officers will have the discretion to send travelers to secondary screenings for their documents to be checked, officials said.

However, President Biden will continue to use a separate border policy, implemented early in the pandemic, to turn away migrants who are seeking protection or economic opportunity — a policy that has been criticized by a top State Department official and the administration’s own medical consultants.

The decision on the land borders was made in part to coincide with the reopening to foreign air travelers, officials said. While those traveling by air will need to show both proof of vaccination and a negative coronavirus test to enter the United States, there will be no testing requirement for those crossing the land borders.

Mexico’s foreign minister, Marcelo Ebrard, said at a news conference Wednesday that his country’s vaccine rollout played a role in the reopening.

“The vaccination averages in Mexico, especially in the northern region, but also the rest of the country, are very high or are comparable to those in the United States,” Mr. Ebrard said. “The basis of global mobility will be vaccination.”

The Centers for Disease Control and Prevention considers people fully inoculated two weeks after they receive a second dose of the Pfizer-BioNTech or Moderna vaccines, or a single dose of Johnson & Johnson’s.

Those who have received vaccines listed for emergency use by the World Health Organization, such as AstraZeneca’s, would also be considered fully vaccinated — a standard that one senior official said would probably be applied to those crossing the land border. Officials added that the C.D.C. was still discussing whether foreigners crossing from Canada or Mexico with two doses from different vaccines could enter.

Many Mexicans have received vaccines that do not have W.H.O. authorization, like Sputnik V, developed in Russia, or the CanSino vaccine from China. President Andrés Manuel López Obrador said on Wednesday that he would press the W.H.O. to authorize them soon.

The decision to lift the restrictions on air travel has been celebrated by business leaders overseas and in the United States. Travel spending dropped nearly in half to about $600 billion in 2020 from a year earlier, according to the U.S. Travel Association, a trade group.

“Border communities have been hamstrung because of port closures,” Representative Veronica Escobar, a Texas Democrat who represents a border district, said in an interview. “Not only did we suffer more significant health devastation in 2020, but the economic devastation has been longer for us because of those port closures.”

Senator Patty Murray, Democrat of Washington, said the lifting of the restrictions would benefit communities she represents like Point Roberts, which are “almost entirely dependent on cross-border travel to sustain their economy.”

But she warned that after “months of economic calamity” inflicted largely by the border closure, more measures would be needed to ensure that the community could fully recover.