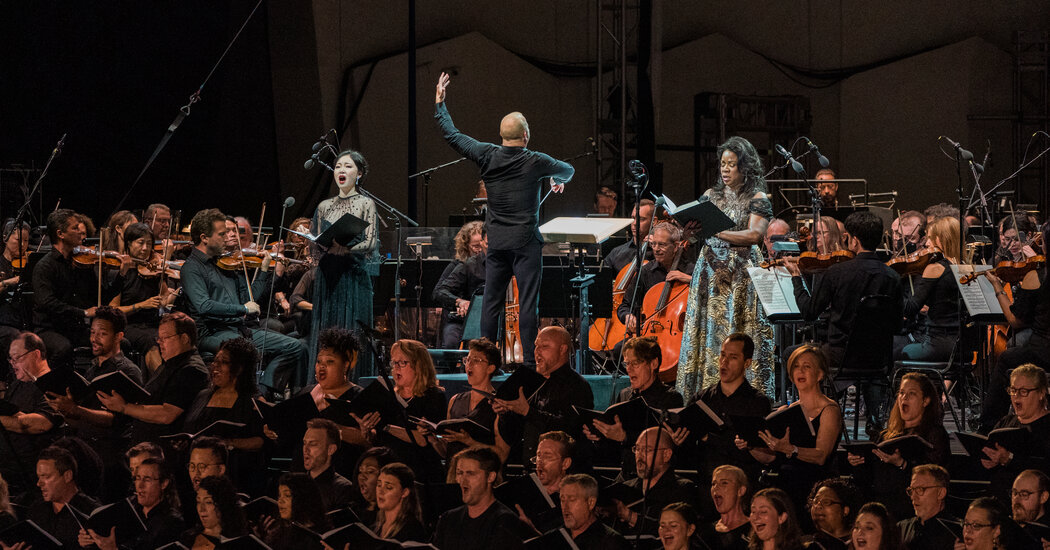 The Metropolitan Opera hardly ever plays concerts at home at Lincoln Center. But before Saturday evening, the company had opened its season with Mahler’s Symphony No. 2, the “Resurrection,” once before.

In 1980, a bitter labor battle kept the Met closed more than two months into the fall. When peace was re-established, Mahler’s sprawling journey of a soul, ending in ecstatic renewal, seemed just the thing — and the symphony, with its enormous orchestral and choral forces working in intricate lock step, is nothing if not a paean to cohesion.

“The ‘Resurrection’ Symphony almost chose itself,” James Levine, then the Met’s music director, said at the time. It was, he added, “a way for the company to get in touch with itself again.”

If there has ever been another time this company needed to get in touch with itself, it is now. That two-month hiatus four decades ago seems like child’s play compared with the situation today.

Twenty twenty-one has, like 1980, brought contentious labor struggles — on top of a pandemic that has threatened the core conditions of live performance and kept the Met closed for an almost unthinkable 18 months. Its orchestra and chorus, as good as any in the world, were furloughed in March 2020 and went unpaid for nearly a year as the financially wounded company and its unions warred over how deep and lasting any pay cuts should be.

Instituting a vaccine mandate and gradually coming to terms with the unions, the Met inched closer to reopening as the summer dragged on. And on Aug. 24, it removed the final barrier by striking a deal with the orchestra, paving the way for a resurrection — and a “Resurrection.”

The company scheduled a pair of free Mahler performances outdoors at Damrosch Park, in the shadow of its theater, on Labor Day weekend, at the start of what has become an opening month. On Saturday, the Met will return indoors for Verdi’s Requiem, in honor of the 20th anniversary of 9/11. And on Sept. 27 the opera season begins in earnest with the company premiere of Terence Blanchard’s “Fire Shut Up in My Bones,” its first work by a Black composer, and, the following evening, a revival of Mussorgsky’s “Boris Godunov.”

Led by the Met’s music director, Yannick Nézet-Séguin, the “Resurrection” Symphony brought the full company and its audience back together in grand style: 90 minutes; an orchestra of 116; a chorus of 100; and 2,500 attending in the park, as well as hundreds more listening from the street. The mood was a blend of parks concert — one woman tried to muffle the crinkling of her bag of potato chips — and serious focus; a man sitting on the aisle followed along with the score, brightly lit on his tablet.

With so much to celebrate, this was indeed a celebratory, smiling reading: Punchy and taut at the start, yes, but without the neurotic, feverish quality that some conductors sustain throughout. There was an overall sense of gentleness and soft-grained textures. The second movement was more sly than sardonic; the climactic burst of dissonance in the third movement was beautiful, not brutal. The chorus, facing the audience in front of the stage and getting its cues from screens, sang with mellow sweetness.

It goes without saying that outdoor classical performance is never ideal. (Speaking from the stage, Peter Gelb, the Met’s general manager, claimed, tongue perhaps in cheek, that Lincoln Center’s president had promised no helicopters in the area for the duration of the symphony. Well. …)

Amplified violin sections are inevitably harsh; woodwinds tend to get swamped by the strings and brasses, even more than usual in Mahler’s dense orchestration. And so much of this and every symphony’s power depends on musicians massed in a room together with their audience. Under the open sky, even on a gorgeous, mild evening like Saturday, the visceral and emotional impact of the music is diffused.

But the offstage percussion and brasses finally sounded like they were coming from a real distance, as they rarely do in a concert hall. And there is special resonance in a great opera company performing this score, so redolent of the music-theater repertory, especially Mahler’s beloved Wagner. The stormy start of “Die Walküre”; the motif of the sleeping Brünnhilde from the end of that work; the mystically stentorian choruses of “Parsifal”; the sighing winds as Verdi’s Otello dies — all echo through the visionary excess of the “Resurrection.”

It was moving to see Denyce Graves, a classic Carmen and Dalila at the Met 20 or 25 years ago, onstage and dignified in the great alto solos, even if her voice is a shadow of its former plush velvet. The soprano soloist, Ying Fang, a radiant Mozartian, was a symbol of the company’s present and future.

While no one is ever hoping for distractions during Mahler, there was something heartwarming about the siren wailing down 62nd Street and tearing into the symphony’s majestic final minutes. What would a New York homecoming be without noise, and more noise?